When I visited Tallinn, Estonia for the first time in February 2016, I fell in love. It was freezing and snow was falling faster than I could even fathom (no exaggeration, it was the most snow I’ve ever seen in my life), but I loved it. Tallinn is easy to fall in love with though. With its wandering alleyways and intriguing history, it’s a city worth visiting any time of year… even when the snow is a foot high. While the snow added a bit of surrealism and magic to my original Estonian experience, I desperately longed to see the charming city in the summer one day. Well, that day came quicker than I ever imagined. 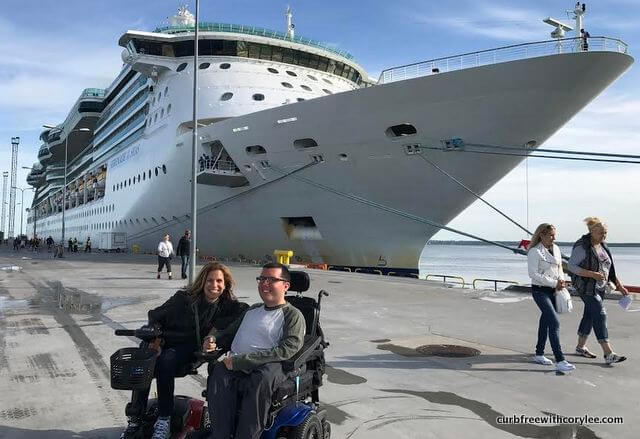 Just a year and a half after my first visit, I greeted Tallinn once again with my mom and my friend Sylvia of Spin the Globe. During our August 2017 cruise through Scandinavia and Russia, Tallinn was one of the ports of call. I couldn’t have been more excited to see the other warmer and more sunny side of the city. While we visited many of the same highlights as last time during our day (including the Old Town), one thing that we got to do differently this time was enjoy the outdoors at an accessible bog. It was beyond anything that I could have ever expected and an extremely unique experience. Here is how my bog adventure went in the amazing country of Estonia – 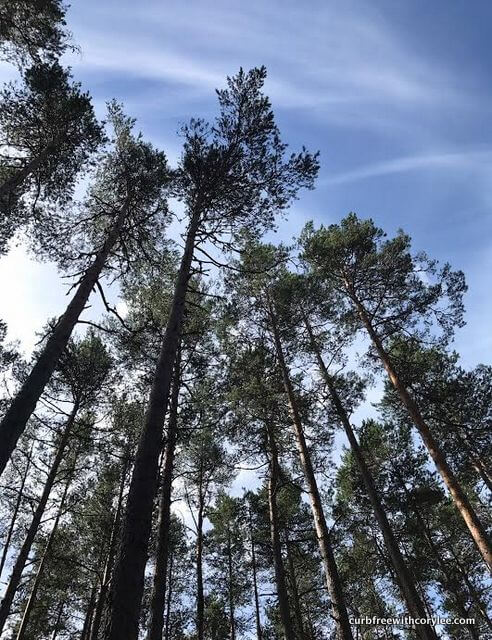 Our cruise ship arrived into Tallinn at 9:30am and was scheduled to depart at 5:30pm, so we had a full day. It was a quick and easy disembarking process and once we were off the ship, we walked/rolled to the cruise harbor exit, where I saw Maarja of Saku Travel waiting for us. My mom and I toured with Maarja and Jüri of Saku Travel the last time we were in Estonia and they were just exceptional, so we knew we wanted to tour with them again. Since that first visit in 2016, they have gotten a new minivan and a new ramp. The ramp worked perfectly for both Sylvia and I, and I was able to stay in my wheelchair thanks to tie-downs in the van. 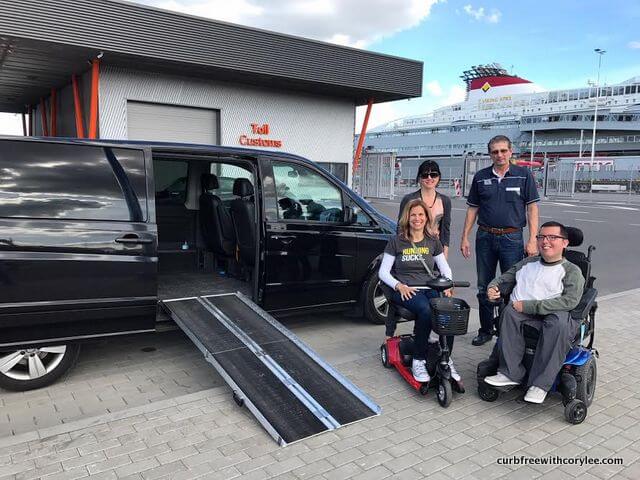 One of the first stops on our tour, and the one that I will be focusing on in this article, was about 45 minutes outside of Tallinn. We drove to Viru Bog, which is located in Lahemaa National Park. Before I tell you all about it, I want to say that this was one of my favorite places that I have EVER been to. As a lover of anything outdoors related (minus mosquitoes), it was a unique sort of paradise for me. When I think of wetlands, and bogs in particular, wheelchair accessibility doesn’t come to mind to be honest, but this bog is possible for any and all visitors. 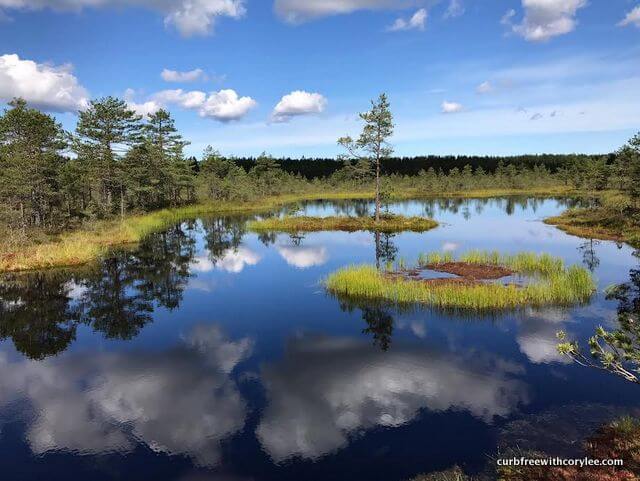 The last time that I visited anything like a bog was back in 1994 when I went to the Okefenokee Swamp in Florida. I was really little then, so my mom easily carried me into a boat and we then rode through the swamp. I still vividly remember being there and looking for alligators, but I thought that I’d never get to experience anything like a swamp or marsh or bog again. While Viru Bog isn’t quite like the Okefenokee Swamp, certain elements did remind me of it, but this bog was even better because it was so accessible.

Since 2013, Viru Bog has been accessible for wheelchair users thanks to raised wooden walkways and platforms. The accessible route goes for 2.2 miles, so it’s a good trek through the bog. At the beginning of the trail, there was even an accessible restroom. I didn’t see another restroom during my trek, so if you need to use it, do it as soon as you get there. 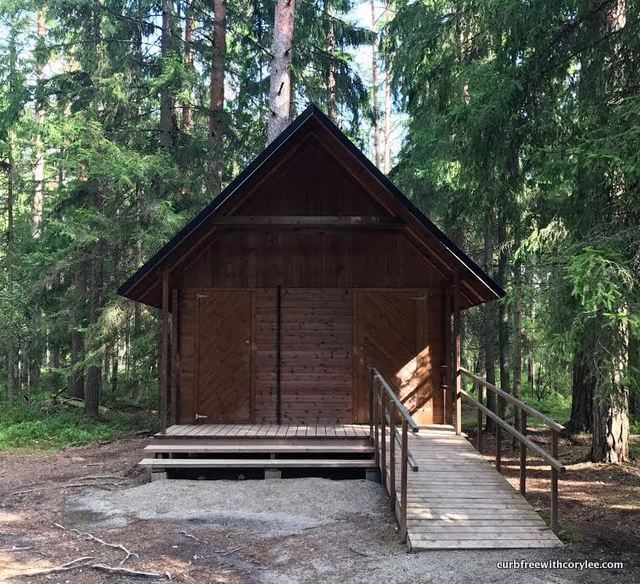 During the first part of our trek, we were in the forest. There were trees all around and Maarja noticed some blueberries on a nearby plant. She picked them and we enjoyed a quick mini snack. They were delicious! 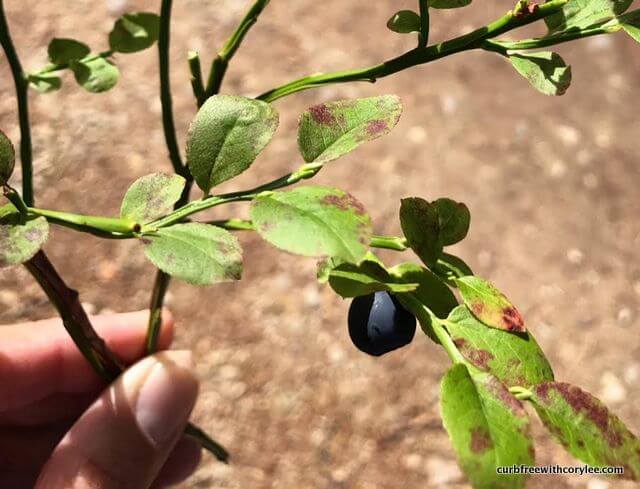 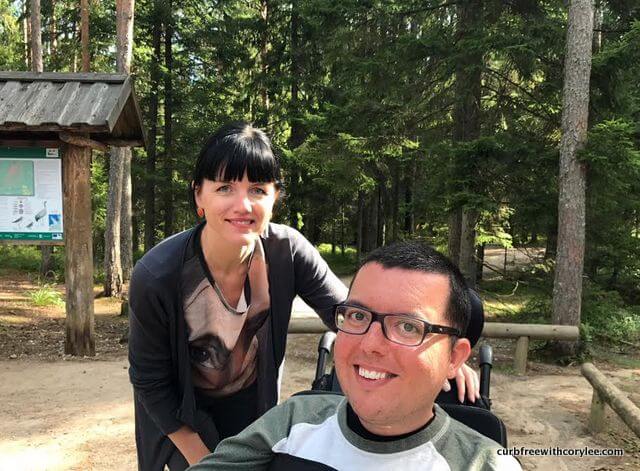 After rolling through the forest for a bit, we arrived at the accessible wooden boardwalk at the bog. Almost immediately, I noticed the water around us. It wasn’t a lot of water like a swamp is per say, but it was marshy. Along the boardwalk, there were information signs every 3-4 minutes or so. The signs told interesting facts about the bog and some even told intriguing stories. I took the time to read them all, as they were written in both Estonian and English. Did you know that Estonia is often referred to as the Kingdom of Bogs? About one quarter of the country is covered in marshes and from anywhere on the mainland, a marsh is always less than 10 kilometers away. 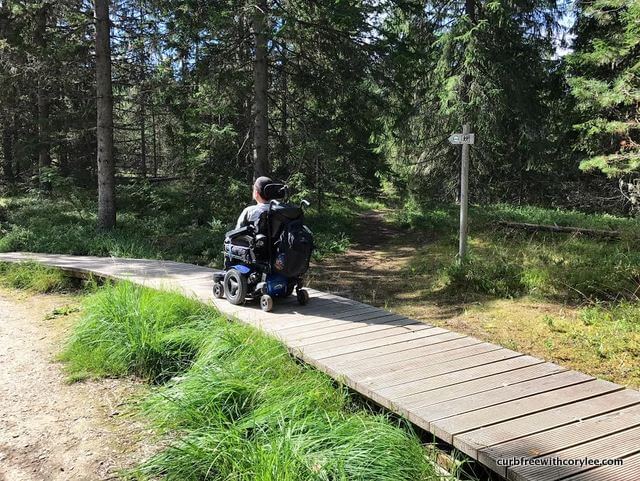 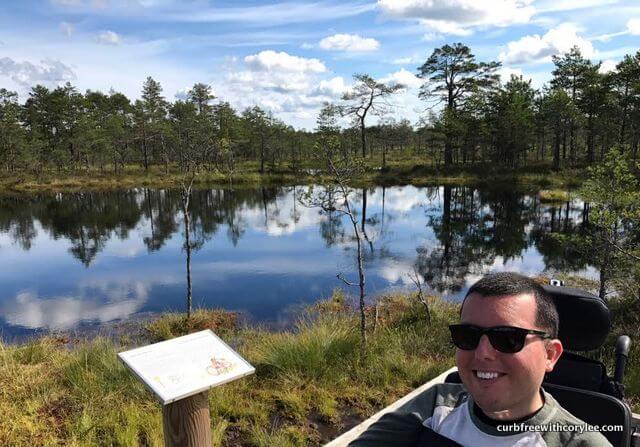 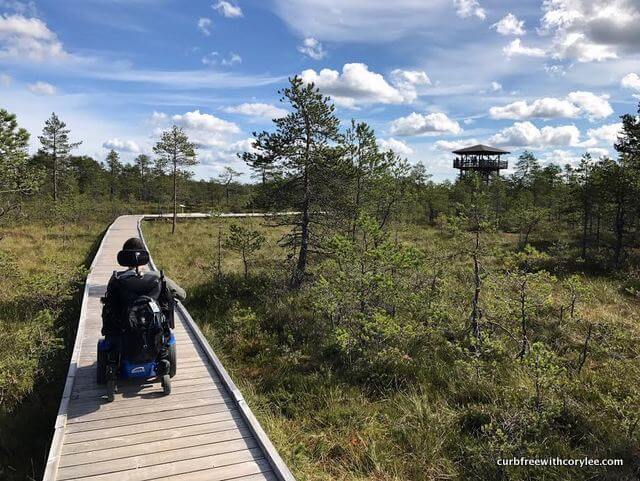 The boardwalk was fairly long and at the end of it, there was an observation tower. The tower was partially accessible, so I was able to roll up to the first level via a ramp. Even though it was just the first level, it was high enough that I could still see much of the bog down below. My mom did go up to the top level though to get a photo. 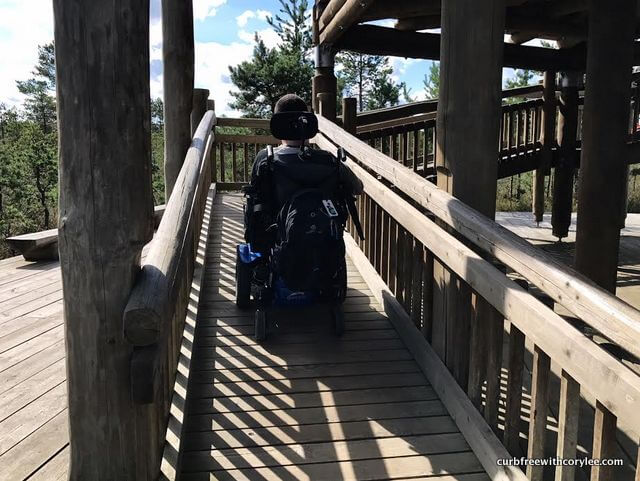 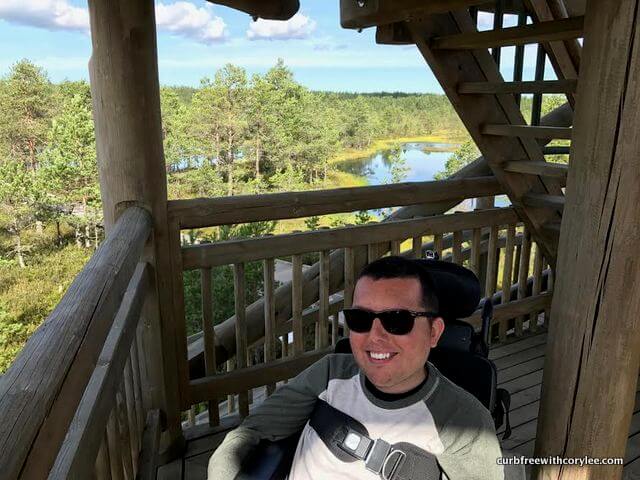 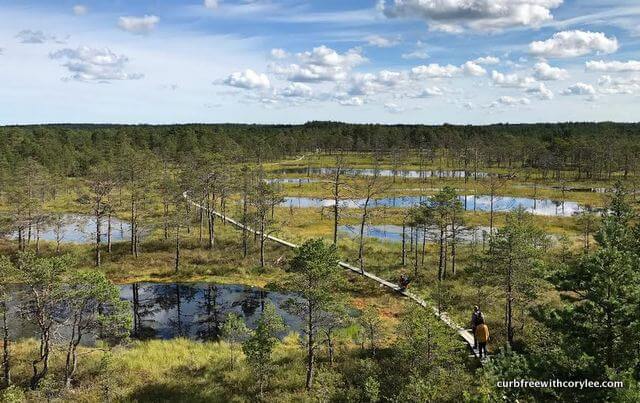 Before heading back to the bog entrance where our van was, we stopped and had a snack. After rolling for over 2 miles, we were famished (just kidding!). Maarja and Jüri brought Estonian chocolate for all of us to try (it was delicious!!), grapes, and apple cider (also delicious!!). It was a perfect mid-morning snack and afterwards, we were ready to make the trek back to the van. 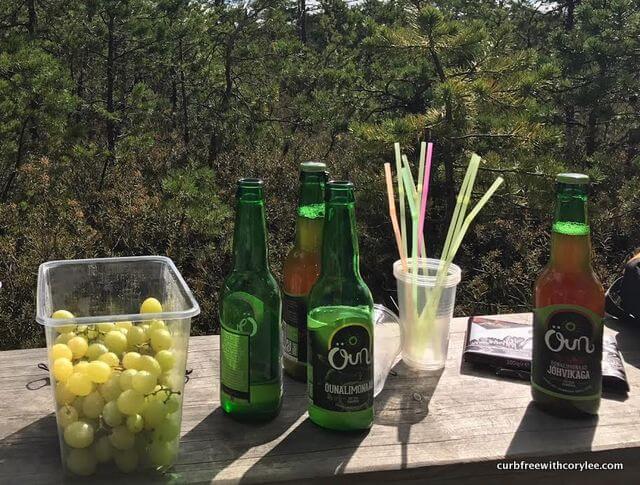 Viru Bog was insanely cool and I was thrilled to find something so accessible in a foreign country. It’s rare to find something outdoors that is this fantastic in the US, where the ADA is in place… so it was extra surprising to see that they have gone to such great lengths to make this wheelchair friendly in Estonia.

When thinking of Estonia, accessibility probably doesn’t immediately come to mind, but sometimes the destinations that we don’t expect to be accessible are the most accommodating. If you’ll be in the Scandinavian country of Estonia for any time at all, getting outdoors in the bog with Saku Travel is certainly a must-do no matter what your abilities are! 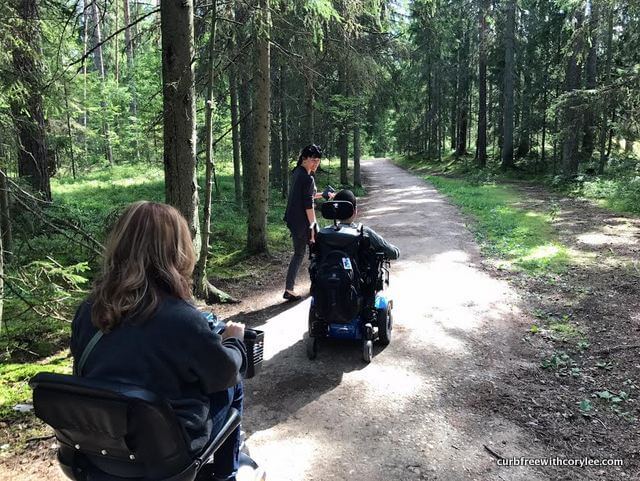 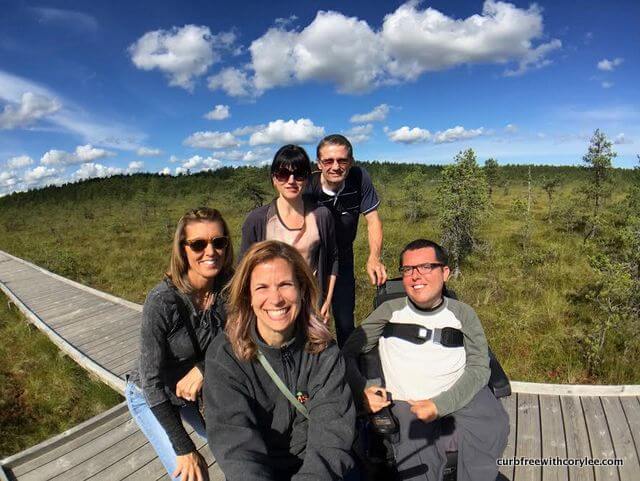 My mom, Sylvia, Maarja, Juri, and I (pardon my weird facial expression. The sun was in my eyes).

*Thank you to Saku Travel for this remarkable tour! While the tour was complimentary, all opinions are authentic and my own. 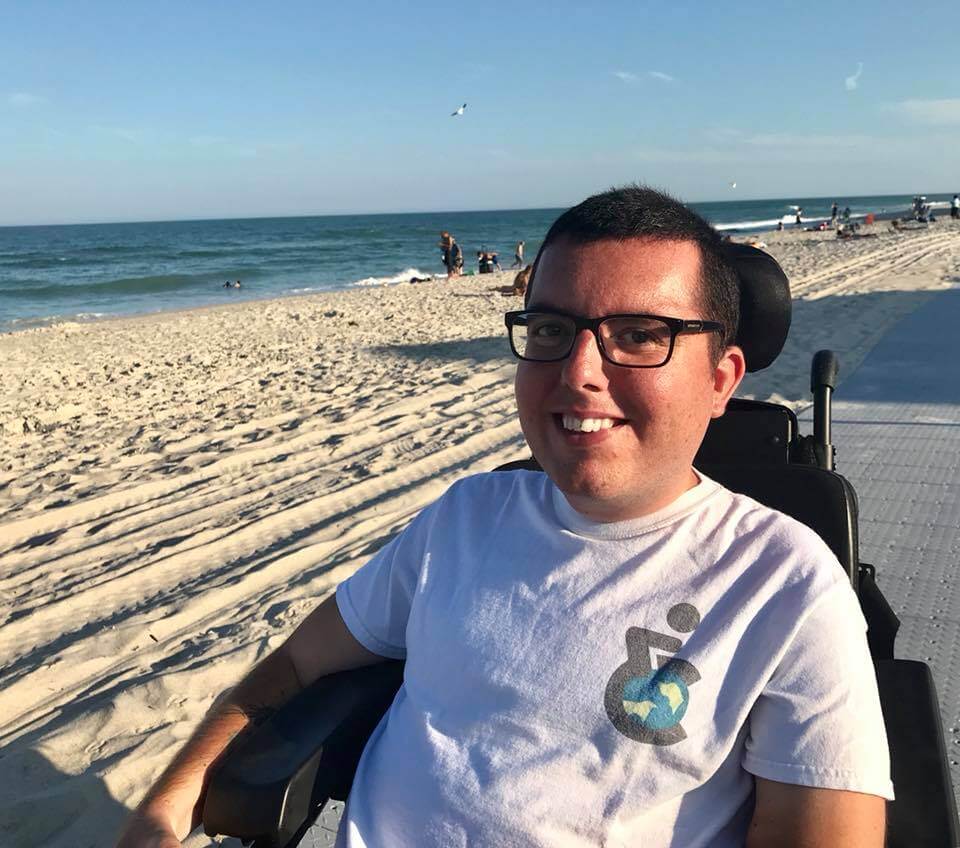 My name is Cory and I'm a 30 year old travel addict, hoping to inspire you to start rolling around the world. 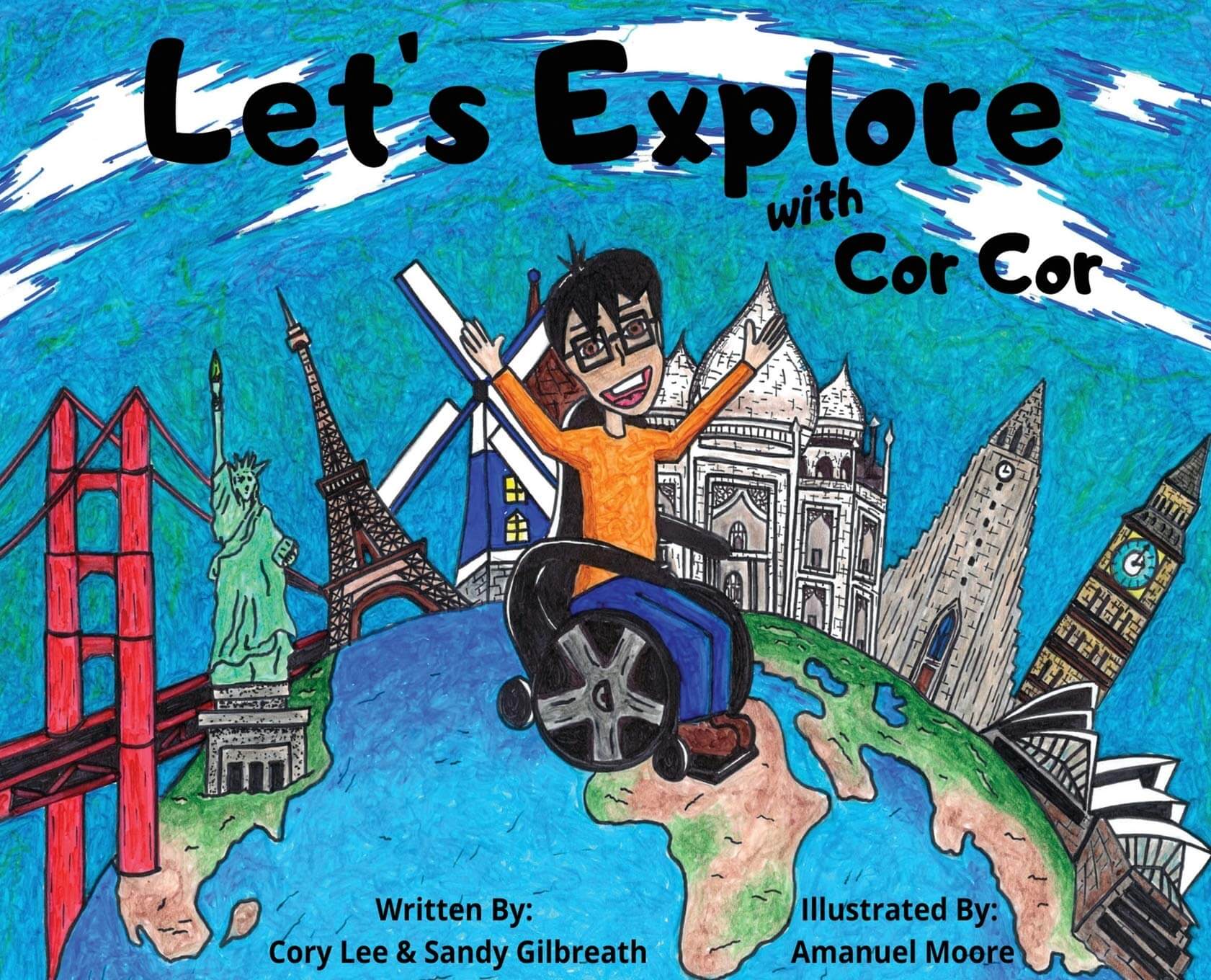 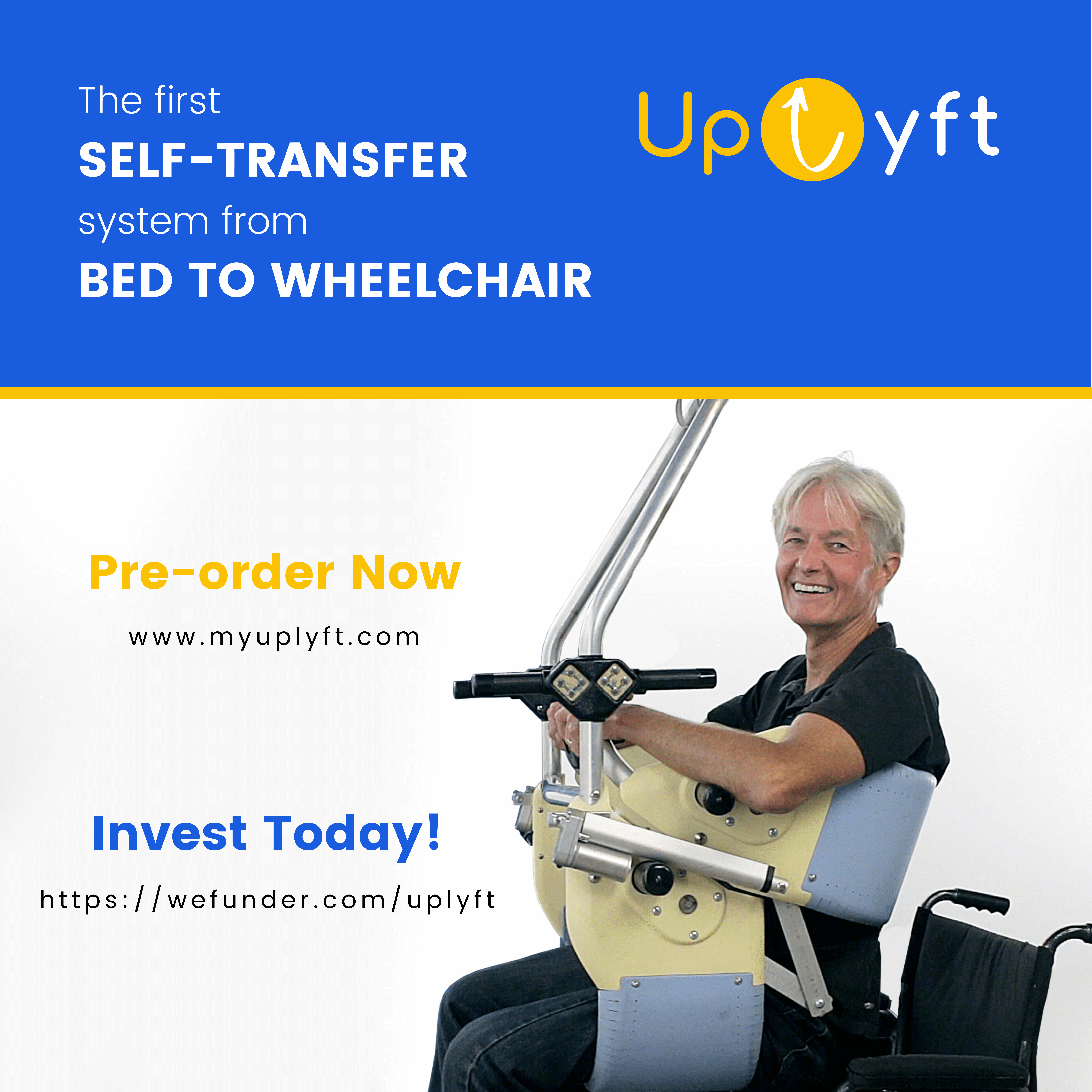 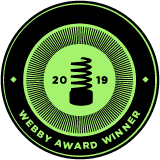 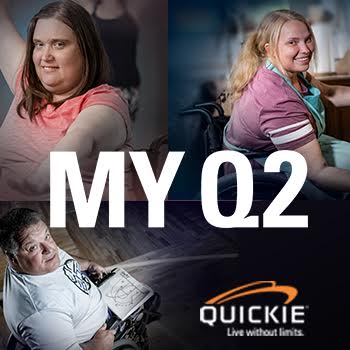 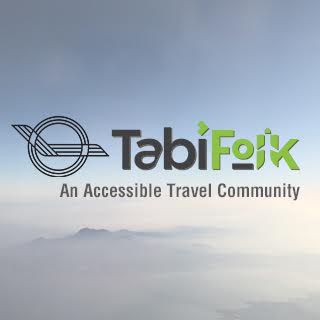 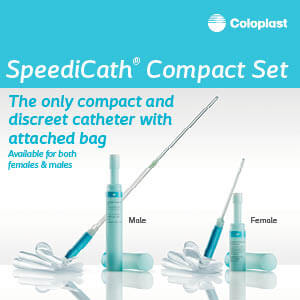